A remarkable number of children accompanied a parent on the divorce trip to Reno. For some, it was their first experience away from home and their first exposure to wide-open spaces, cattle and horses, and possibly a one-room schoolhouse near a rustic guest ranch. Children who grew up in Reno experienced the effects of the divorce trade largely in school, where temporary classmates sometimes came and went without explanation. Local children whose families interacted with the divorce trade professionally were also more aware of the transient community in their midst.

Nevada’s divorce courts showed great concern over the welfare of children in divorce cases. Unresolved custody issues could cause long delays in a divorce case until the court was satisfied that the children’s emotional and physical care had been assured. The court often retained jurisdiction over the terms of the divorce in order to have leverage if the agreement was not adhered to. This was a general departure for the court, which typically did not retain jurisdiction once the decree was issued.

Steven Jonas, M.D. was a child of nine in the spring of 1946, when he and his mother boarded the train in New York’s Pennsylvania Station and headed to Reno. Dr. Jonas’s memories of his six-week visit are of a chicken ranch outside of Reno, where he could hear the sounds of trucks gearing down for a hill, and the whistle of a train. For a boy who attended a private school in Manhattan, the one-room schoolhouse he attended for six weeks made a lasting impression, as did the trips he and his mother took to Virginia City and Carson City. The names of the ranch and his school eluded him, but his vivid recollections suggest that he may have stayed at a small ranch in Washoe Valley, attended Franktown School, and heard the whistles of the Virginia & Truckee Railroad and the rattling of trucks along the Carson Highway.

In the fall of 1963, soon after the assassination of President John F. Kennedy, Pauline Duffield packed up her three young girls, ages 8, 5, and 3, and together they boarded a Greyhound Bus headed for Reno, Nevada. Pauline’s goal was divorce, but the girls weren’t told where they were going or why. Her daughter Peggy's first memory upon arrival was the sight of thousands of sandbags piled up near the Truckee River, a response to a recent flood. (See her poem “Come Hell or High Water”).

The family took up residence on the second floor of the Hotel Manning, located across from the railroad tracks at 29 E. Plaza Street. The Manning was a third-rate hotel catering to divorcées and single men, and crime was not infrequent. Peggy recalls the steam radiators and the pungent smell of diesel. Frightened by the noises they heard, she and her sisters would often hide under the bed. (See poem “Hotel Manning”).

The girls attended St. Thomas Aquinas School and the Holy Child Day Home, while Pauline secured a job as a change girl at Harolds Club. Peggy recalls slipping in the back door of Harolds for hot dogs. After a while, Pauline moved her children to the Dude Corral Trailer Park at 2601 Prater Way in Sparks. The managers of the park, Mr. and Mrs. Lake, took the family in and rented them a small trailer. The railroad tracks were still close by, and Peggy and her sisters would play on the tracks, much to their mother’s consternation.

In 1965, Pauline finally filed for divorce and when it was final she married Jack Chase. This prompted a move to a larger trailer at the Dude Corral, where the family lived until early 1966, when the Dude Corral was condemned to make way for the new interstate highway. From there, they moved to the Park Motel across from the Dairy Queen on Prater Way and the girls were enrolled in Immaculate Conception Catholic School in Sparks.

It wasn’t until many years later that Peggy realized that her mother had brought the family to Reno for a divorce. She was surprised to learn that Reno was the Divorce Capital of the World.

For therapy, Peggy writes poetry. She has allowed the Reno Divorce History Project the use of three of her poems: “Come Hell or High Water,” “Hotel Manning” and "Cloistered in '63." 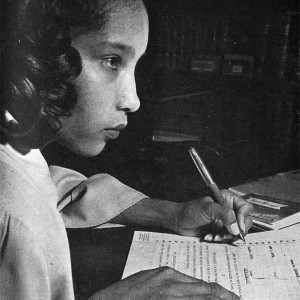 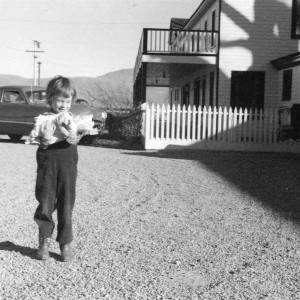 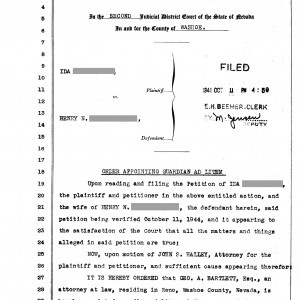 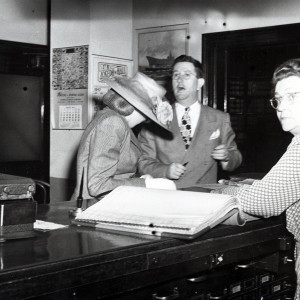